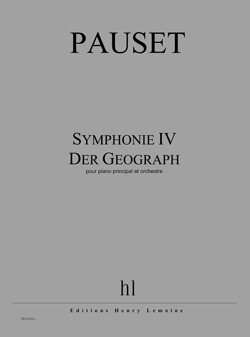 This piece is the first part of atriptych for large orchestra, to which is temporarily added a principal piano. It was followed by Die Tänzerin for large orchestra, and Erstarrte Schatten for six solo voices, live electronics and large orchestra. Each work is based on an arrangement having at least a relation to the notion of impossibility. Here, it is about representation, through a very simple thinking expenment: what happens when one looks at a fragment of the reality surrounding us through a map of the world that is partially riddled with holes. What does the map represent? What remains of the reality it duplicates symbolically? And what kind of turbulence is at work when reality and representation collide?
This relatively short (approx. 20') piece lays out this thinking experiment in seven large sections, constantly renewing the soloist's function, which is, in turn, the subject of the representation and cartographer of the orchestral world that surrounds him. In the second large section, an "accompanied cadenza", the piano is looked upon as two collections: a collection of white keys and a collection of black keys. In the following section, it is a collection of important moments of the piano playing that are going to serve as a common language for the soloist and for the orchestra: thought of sound, attack, sound "aura", resonance and final muffling will be entrusted to each protagonist in turn.
Beyond, continuing with the same metaphor, I imagined a geographer also preoccupied by the representation of the subterranean world, sometimes making heard the normative power of the orchestra, some times its hidden face, the reverse of its codes and its "good manners". What l sought then in the composition of this score and the two other parts that followed, is music that would abolish the notion of sketch: music whose principles, premisses, technique and expression would be, so to speak, in constant circulation. l think above all of a music of the impossible, which would listen to our own culture and transmit to us, every now and again, its unmentionable evidences, a music that would shatter the comfort of admitted codes and, in particular, those of a moribund culture inalterably attached to wanting what it already knows.