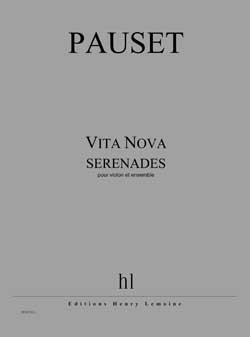 There exists, in the hand of Roland Barthes, a series of eight pages with the eminently programmatic title of Vita Nova. This text, or rather these painstakingly adjusted sketches, has the tone of a personal byword, quite similar to that of Pascal (Pascal being, in addition, specifically quoted in the text). The first phrase (the world as the contradictory object of exhibition and indifference) is a strange mixture of Schopenhauer and Debord, as if it were necessary, urgent, to cause confusion: RB will undergo a change of life, but only he will witness it.
Literature, the subject of the new life, will itself be the new life ("literature as the substitute..."). It is thus a question of a serenade: a serenade wavering between gesture and meaning: just as well to speak of everlasting chastity straightaway (in general, a resounding defeat is worth more than a meagre success).
In this new piece (which has yet to be composed as I write these lines), a dialogue doomed to failure from the start, will be attempted, despite all odds, between a solo violin conspicuously displaying a vast repertoire of rhetorical devices, and an ensemble conceived of as a choir of disincarnated vocal gestures. A collection of serenades will then be laid out, sometimes consecutively, other times simultaneously.
Plucking, this specific means of sound production characteristic to the trio (mandolin, guitar, and harp) that has been integrated into the Nieuw Ensemble, is one of the most vocally promising sound images available: from the lute's nostalgic recollection accompanying the reviving voices to the vast register of onomatopoeia that it elicits.
Roland Barthes can hardly be evoked without mentioning his critical discourse on (literary) modernity. Since writing my quintet Les Voix Humaines and my orchestral piece with piano Der Geograph, I want to position my work on the dual territory of overtaking modernity by the absences that it has itself established (the past, form, deconstruction) and the anxiety that can be generated by a concept absent from the musical realm: impossibility.