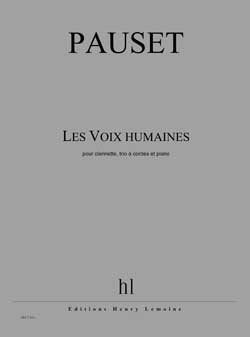 In general, each of my works is connected, explicitly or not, with a subject a priori exteriorto music. With time, it is most often subjects that are very much exterior - or even recalcitrant - to music, which impose themselves in my work: drones in Kataster for ensemble and large orchestra; Paris Hilton in my second monodrama, Wonderful Deluxe; the battle of Stalingrad in Gilgamesch in Stalingrad, etc. Rare, then, with me are examples of "pure" or abstract music, so much does this denomination and its complicated prehistory (E.T.A. Hoffmann - Wagner - Hanslick) propound paradoxes and aporia. Yet, that is indeed the case with my Human Voices. What kind of music should one write? Or rather, what moral stance should one adopt vis-à-vis the prevailing conservative-authoritarian-market ideology that, with all the efficacity of sympathy and enrolment in joyous affects, has acquired the ability to accept then make spectacular, for its own ends, all possible forms of deviance or contestation? This question is, of course, unanswerable. By construction, no aesthetic form can, as such, shape policy. At best, it can provide temporary, fragile metaphors, of which the transmission and individual interpretation may constitute the premisses of a more general reflection and - why not? - an action. Music, as a particular sphere of aesthetics, is therefore essentially delegation, and it is precisely this theme that is at the centre of the work.
Just as a human voice is recognised by a friend, even beyond the use of a foreign language that would convey it, so is a piece of music recognised by its materials and sound constructions: instruments known by all are, however, blurred here in their contours when the music imposes its own lexicon.
l composed Les Voix humaines, for five instruments, practically without any preliminary sketch or clearly defined plan. I wanted the music to compose itself: the identity of the three possible introductions, composed first, is subsequently diluted in the following moments. l then decided, contrary to custom, to divide up these different possible beginnings in the very course of the piece, somewhat as if the music were a person speaking about him - or herself in the past.
The central metaphor of the work would essentially be that of the voice (and doubtless of the body or, more precisely, of the choreography during the gigue that distinguishes the piece in the middle): the voice as instrument, the voice as identity (and it then becomes, strictly speaking, human), and, finally, the voice as instrument of identity: the voice that says no. lt is only at this moment that the musical and the political can carry on a dialogue, that the music can attempt to express its era.