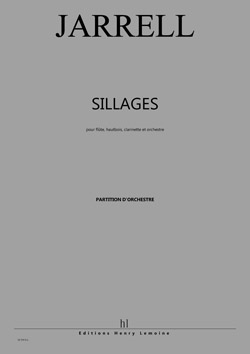 Sillage (Wakes): "the trace that a ship leaves behind it on the surface of waters," says the dictionary. But also: "Part of a fluid (liquid, air) left behind a body in motion - perturbations that occur therein." As a child, Michael Jarrell was as keen on drawing as he was on music. and although the latter eventually won out, visuel, graphie or geometric inspiration have never completely left the Geneva-born composer. In his sound universe, sillages become undulations, waves, backwash or eddies whilst also suggesting the idea of passage or widening. Moreover, he uses an image far removed from the dryness of a dictionary definition: that of a "quill pen drawing a line on a blotter". The ink then takes on a lite of its own as it impregnates the paper unevenly. "With me, titles serve as a clue, a track for grasping the poetic idea of a work." As will have been understood, Michael Jarrell's plural Sillages open up a wide range of meanings, expressing the composer's concerns, whether musical, formal or simply human. With the first sillage, ita eddies indicate a continuity in the composer's catalogue. This creation also marks the complicity that links him to clarinettist Paul Meyer, to whom Jarrell has already dedicated a concerto. "Through Paul, I got to know the flautist Emmanuel Pahud, then the oboist François Leleux... I greatly appreciate this young generatlon of musicians, capable of playing the classics perfectly as well as remaining attuned to their era." Second sillage: affective. As for the third, it can be heard in the work's very matter, right from the outset. Flute, oboe and clarinet play an A, the same note that musicians use for tuning up before a concert. Two notes follow this A, then others, taken up by the orchestra. which acts as a sort of reflection or distorting mirror. The sound field broadens, and these figures, born from the breath of the wind soloists, take on their own life in the symphonic ensemble surrounding them. We again find this idea throughout the piece, particularly in a great oboe solo two-thirds of the way through the score. "I like to write within more or less rigid rules and fetters, always with the aim of channelling energy and expression," Michael Jarrell points out. "Like a stream with numerous twists but which would never overflow its banks."

"In Jarrell's introspective dialogue, wich received its world premiere in a newly expanded form, the three soloists (Emmanuel Pahud, François Leleux and Paul Meyer) float across a wash of delicate, minutely-deployed sonorities, which provides the "trails" of sound described in the piece's title."


"Jarrell deploys a trio of wind soloists (here the excellent Emmanuel Pahud, François Leleux and Paul Meyer) whose residual harmonies are picked up by the orchestra."


"The stillness of the first movement is magical: wonderfully elusive textures, played with shimmering delicacy."