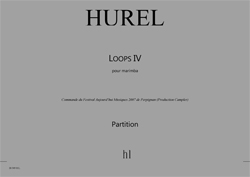 In reference to Loops I for flute, I wrote: "the sound of the instrument and the playing techniques are less important than the process of transformation that is set into motion." The piece's title both declares and describes the compositional principle. There is an alliterative quality to this title, and a character that transcends a larger series of pieces based on the same principle. I begin with short rhythmic patterns that are repeated and transformed little by little. Through successive additions or subtractions, these simple patterns end up creating new loops themselves.
In Loops IV, for Marimba - as in Loops II and Loops III - I incorporated an additional layer into the principle of loops. In fact, the piece is constructed in such a way that the process of cellular transformation always returns to the opening figure. Though the music seems to be in perpetual transformation due to the morphing process in play, listeners will nevertheless have the impression of going in circles, because each large procedure merely brings them back to the starting point, as evidenced by the small sub-loops heard throughout the piece.
In addition, while essentially remaining a very playful piece characterised by rhythmic energy, Loops IV differentiates itself from other pieces in the series due to the instrument's "poetics" that play a significant role. Thus, the piece's slower sections highlight the marimba's timbre, with the principle of looping becoming secondary, and making room for a sort of poetic intensity absent in the other Loops.
Loops IV represents another stage of my work with percussion, work begun in 1992 with La Célébration des Invisibles, then expanded in 1996 with ...à mesure, in 1999 and 2000 in Tombeau in memoriam Gérard Grisey and the Quatre variations pour percussion et ensemble , then in 2001 in Loops II for vibraphone and finally in 2006 with HORS-JEU for percussion and electronics.
Loops IV is dedicated to Jean Geoffroy and Eve Payeur.