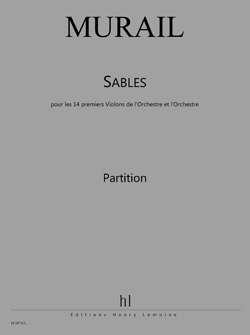 Sables returns to certain preoccupations addressed in Altitude 8000, and takes them further: an absence of punctual events (no percussive sounds), extreme continuity (no silence, aside from the beginning of the piece...).
The notes are regarded as simple "grains of sand" with their accumulation creating shapes, "dunes". The piece is not yet truly spectral, but already uses phenomena of natural resonance.
Program notes written for the premier specify that, "The harmonic system uses the only objective points of reference... which are natural resonances, and white noise symbolized by clusters. The harmonic framework is in constant evolution: there is never a moment given to "a harmony", but a process of harmonic transformation that is ongoing... The decision to avoid events results in the impossibility of distinguishing distinct parts. We can only take into account the five separate regions due to the moments where the process(es) of evolution is reversed. Everything is subjected to this rule: the harmonic framework, orchestration, densities, intensities, and structure at a given moment. However, the procedures in use for each type of phenomena are not necessarily concomitant, and there are "crossed" procedures... The principal of continuity leads to "microcosmic" composition: the notes are unimportance in themselves. They cannot be individualised, only the evolution resulting from their presence can be heard...