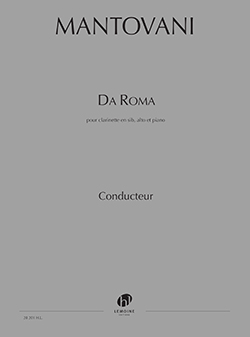 Da Roma reflects my current investigation of the notion of process. Written at the Villa Medici in 2004, this piece is the sequel to Cycle des gris for baroque orchestra or indeed Fées for string quartet, works in which I have tried to build a more continuous discourse, one that is less founded on rupture than before. If I have favoured in my work a confrontation between antagonistic musical ideas, I have recently been allempting to introduce into my language, which is still based on energy, the idea of the gradual transformation of musical elements. It is from this progressive distortion of matter that the discourse arises.
The work's first element is a very slow ostinato on the piano, a repeated, varied consonant chord, tolling like a knell about which the other instruments act as "decorators". The melodic fragments tossed off by the clarinet or viola lie in the foreground, until they give rise to a more unstable idea that takes over from the initial ostinato. This idea sets off a low-lying chord against descending arpeggios that, although becoming more and more frequent, give way before the repetition of the opposing chord, in progressive transpositions in the high register. In order to break the periodicity of this chord, a descending wave appears which in turn steals the limelight from the preceding idea. This wave is thinned out as it is repeated, until it produces a regular pulse, though this is offset by a faster pulse that is set up and that is in turn offset by a still faster pulse... In order in break out of this "masking" game, with one musical idea masking another, the following section asserts itself through rupture and reintroduces the harmony of the initial knell. The clarinet, in a devastating, disjointed solo, and the solo viola, reintroducing an ostinato, return to conclude the piece in meditative mood.
Da Roma, commissioned by Editions EMC, is primarily a homage to three musicians, all members of the Ensemble intercontemporain, who have regularly accompanied me for several years: Odile Auboin, Hideki Nagano and Alain Billard