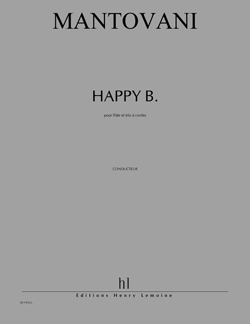 For a special concert at Carnegie Hall in 2005, the New York based Ensemble Sospeso decided to commission short chamber music pieces from several composers in homage to Pierre Boulez's 80th birthday. It was a particular challenge to give, in a miniature, simultaneous tribute to the conductor, founder of institutions (with which I have frequently collaborated), composer, and more generally, the man who, through his works and writings, truly embodies the music of our time.
My piece is not inspired by Pierre Boulez's music, but rather... by the song "Happy Birthday to You", which begins and ends my piece (even though register changes with regards to the original melody render the model difficult to perceive). Between these two sections, the discourse is always fluid, leaving ample space for a "flute-like" virtuosity that could evoke the Sonatine from 1946, or ...Explosante fixe... The discourse is never static, because the material is in perpetual motion, being submitted either to linear procedures (one continuous idea, in the first half of the work, disintegrates progressively), or to the logic of motif-based development. Happy B. is an enthusiastic piece, and most of all, a celebration of Boulez's extraordinary energy.