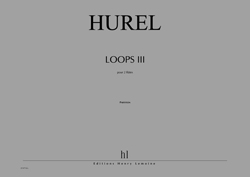 The flute, as a solo instrument, came of age with music of the 20th century, and from Debussy and continuing with Varèse, Berio and Boulez, numerous composers have written for it. We observe that in most pieces written for solo flute after the second half of the last century, extended playing techniques - pizzicato, tongue ram, key noise, glissando, breath, whistle tone... - are standard practice and that the instrument has become the emissary of a certain type of "exoticism".
In my case, having had the chance to work regularly with Pierre-André Valade since my youth, I did not avoid that temptation and Eolia, written in 1981, remains a piece highly symptomatic of this approach.
However, since Loops I for solo flute (2000), I have deliberately tried to use the flute where its strengths lie - flexibility, fluidity, virtuosity - making no use of extended playing techniques. With regards to Loops I, I wrote: "I have wanted to write a new flute piece for a long time. Since Eolia in fact, where I attempted to detour the effusive classical style of flute playing found in traditional literature. In Loops I, the sound of the instrument and the playing techniques are less important than the process of transformation that is set into motion. I begin with short rhythmic patterns that are repeated and transformed little by little. Through successive additions or subtractions, these simple patterns, end up creating new loops themselves."
I could easily say the same thing about Loops III, for two flutes, a new piece with the same concerns, but with the slight difference that this time the piece incorporates a new idea, music deliberately intended to be obsessional. In fact, each transformation of the short exposed motives, inevitably leads to a loop that has already been heard and bit-by-bit the listener is caught up in a sort of spider web from which it is very difficult to escape.
In other words, several identifiable loops structure the form of the piece and the transformations that they undergo through morphing, as varied as they may by, do not always bring us to the same place. Though the music seems to constantly be in complete evolution, the stages we go through are always the same and it is on this paradox that the piece is constructed.
In addition, while Loops I was above all based on melody, Loops II is constructed from spectrum-derived aggregates. Also, the decision to write for two flutes stemmed from my desire to make two instruments sound like one, a desire that can also be found in the sound synthesis work that I am developing with ensembles or orchestras. Thus, both instruments are often homorhythmic and while the piece remains very rhythmical, my attention was primarily focused on the harmonies and timbres created by an intensive use of micro-intervals. From time to time, one of the two flutes escapes and "goes its own way" - with the melodic character taking the lead - coming back into synch with the other one a few measures later.
Loops I was an amusing piece, tossed onto the page, a sort of breath of fresh air in my production, whereas Loops III, though it contains that form of spontaneity, seems like a more rigorous piece.
My own work with the flute continued with Ritornello for flute and piano that I wrote for Anne-Cécile Cuniot and Jean-Marie Cottet, and Phonus ou la voix du faune for flute and orchestra composed for Benoît Fromanger and the Oslo Philharmonic, with motives and orchestral style directly inspired by l'après-midi d'un faune, there again the flute assuming a more traditional character, already present in Syrinx.
Perhaps the flute and I have now gone full circle.
Philippe Hurel