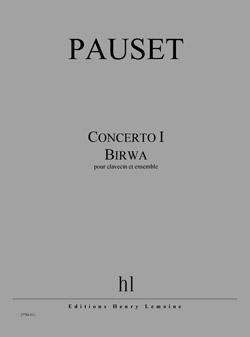 There is poetry like the memory: what is lost is redrawn, reshaped in the language, by the untiring lamination of evocations. The concerto form, by its founding imbalance, seems capable of transcribing this poetic work. I might almost say that the principal harpsichord part here takes on forgetfulness and fragility, nurtured only by residues neglected by the ensemble, which, by its encircling, as physical as it is sonorous, constantly threatens to swallow up the soloist. A few optimistic clearings, nonetheless, will, for a moment, make believe in a newfound freshness, a spared innocence, were it only by their titles: "Pomme dediée à la mer" (Apple dedicated to the sea), "Narcisse du marbre" (Narcissus of the marble), "Papillon de pierre" (Stone butterflyAl-Birwa is the name of the village - now gone - where the great Palestinian poet Mahmoud Darwich was born.
A final word after this programme note that is already old. l must admit, poetry enters my musical horizon only with difficulty, and this mode of expression is quite foreign to me, with a few exceptions, of course: Mahmoud Darwich, as well as Virgilio Giotti (for a work most certainly to come), Virgil (for my first poetic emotion following the reading of the Liber bucolicorum), Durs Grünbein (for Porzellan. Poem vom Untergang meiner Stadt), and a few others. I am an obsessive reader of theoretical texts: philosophy, economy, music, architecture, physics, and quantitatively, the theoretical mode of thought has rarely coincided with the poetic art, even though, since Lucretius, scientific poetry has managed to weave a continuous connection between knowledge and poetry. The fundamental question that has often brought me up short as to the possibility of composing on or with poetic texts is quite classic: poetry constructs its own entanglement of musical parameters (rhythm, intonation), and any musical addition takes away with it questions of a literally unfathomable complexity, if we deem it necessary to renew or exceed preexisting historical models. And, in fact, music - like that of this concerto - based on latent poetics, even though it irrigates work's construction in depth, constituted a milestone in my own reflection on this difficult subject at the time (in 2005).