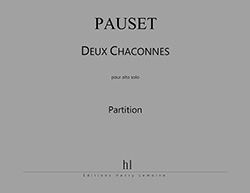 The original aim was to compose two chaconnes, or rather a double chaconne, one as a variation of extremely directive discursive material, and the other as a circular development of clearly defined figures which could also interchange some of their specific criteria. One could in fact speak of a "gestural modulation" in the same way one speaks of the well-known modulation in circular rings.
I have tried in this work to imbue silence with a strong functional value, providing a mirage of perception and the musical flow. At the start of the chaconne a lively and incisive bar in triple time is followed by a silence that is twice as long.
1) The previous bar can still be heard during the silence, which thus acts as a memorizer of the preceding fragment. After a certain length of silence the aural image fades and only the dominant aspect - the pizzicato - remains, for the fossilization brought about by the silence also acts as a filter.
2) This silence, by its very length, will prepare us (by questioning) for what follows: the balance between the different elements of bars one and three will be much higher because of the silence, so that we can say it has a discriminatory rôle with regard to the figural elements in play.
a) Either the pizzicato in bar one to be repeated in bar three will be incorporated into the musical flow by the means of an "already heard sequence" - pizzicato-silence-pizzicato.
b) or the pizzicato will not be repeated and will acquire a particular, distinctive signaletic value.
It is this second proposition (b) which will serve as the starting point and basic principle of the work. The first part of the chaconne (Tempo I), which will serve as a model, uses only a single silence, thus conferring on it an emblematic value. Five particular elements are exposed within a structure of floating, furtive pitches, which will barely focus the perception of remarkable events. It is because of the silences that the principal elements will evolve and resettle themselves, for each silence sets off a change of element.
We can thus say that we are in the presence of a double chaconne in that this gestural strategy of silence is achieved based on the rhythmic and melodic material of what I would call a "background chaconne", with its own structural autonomy. Hence the mirage that I mentioned above.