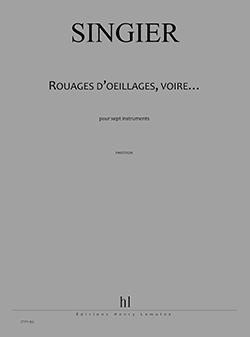 The seed of my composition, Rouages d'oeillades, voire... was planted when I met Joél Bons at Chigiana Academy in Sienna where we had both gone to study composition under the direction of Franco Donatoni. Joel, composer, was then the guitarist of a recently formed Dutch group called the Nieuw Ensemble of Amsterdam, directed by Théo Lowendie. Very quickly, a project was created with the group, which invited composers to develop a tailor-made repertoire for its speciﬁc instrumentation (flute, clarinet, percussion, harp, guitar, mandolin, viola, double bass).
At the time, I was very much inspired by the particular colour of this instrumental combination (where plucked strings dominate). I had, indeed, trained as a guitarist but had written virtually nothing for the instrument... l saw this as an opportunity to investigate its capacity to generate new colours and to reflect on the ambiguity of its established repertoire, in broad terms "folkloric" music (mainly Spanish and South American), works of certain classic academicism and pieces with jazz-like traits... hence the solo guitar at the centre of this piece, accompanied by "pizzicato" on the double bass and a percussionist playing the cymbals using a drum brush (to elicit jazz) but also sounding his castanets with a typically "Hispanic" rhythmic cell (as a reminder of the instrument's roots).
As for the formal idea that underpins the essence of this piece, I'd say that l based it on a module which was meant to preside over the work in progress; above all, what interested me was to make it intermittently discernible... whence came the idea of "glances" of which the title refers to. l also wanted this module to act as an aurally recognisable marker, and that it not just be a principle of abstract construction without a link to its perception (I often witnessed the unfavourable consequences of this method in concerts I attended at the time).
Lastly, I tried to reduce slightly the pontiﬁcating character of this type of reflection by creating a musical dialogue of interlocking timbres, rich in contrast and integrated into a rather simple rhythmic frequency. The end result, I hoped, would be closer to humour than to obvious beauty or to an "educational demonstration".