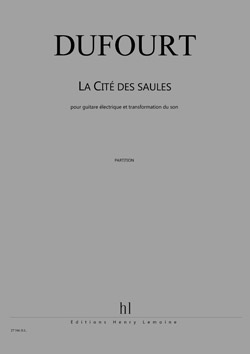 The Cité des Saules (City of Willows) is a metaphor for departure. The entire pièce is conceived as a form of reciprocal genesis between inwardness and space. There is no motif, no outline, no figure derived from a background. All that matters is the spatialization process.
The piece comes down to a process of emergence with the only distinctive features being the degrees of depth and opening. Articulations are reduced to the strict minimum: interstices, active voids, coloured segments, luminous events, interplay of transparencies, dark rumblings. The work ends by turning in on itself, by being reabsorbed into its own background.
The sound of the opening chord resounds with an automatic inverted envelope wah-wah. The sound rises upward, accompanying the resonance. I also strived for sonorities with vast proportions, by implementing a "spatializer", and by superimposing them, as a result of echo procedures.
The wah-wah can also removed abruptly, allowing the fundamental sounds that had been put aside earlier, to reappear. The quality of the filters is very important, because through filtering the high frequencies, the darker elements can be modulated.
Distortion should be differentiated from saturation, even though the principle is the same. Distortion is harsh and noisy, to the extent that I preferred to use saturation, which permits the note to be heard, fading out like a normal vibration.
Among wah-wah effects with structural aspects, we notice an effect that is obtained automatically, which allows the resonance to be inverted from low to high while sustained. It is the high frequencies that are sustained. This produces beautiful effects of emergence and light.
Often, I also used the combination of automatic wah-wah, spatial effects, envelope inversion, and echo. Minimal overlapping produces effects of pure emergence. In addition, phenomena of timbre iridescence can be drawn from the harmonic sphere.
The piece's construction is largely based on echo reinjection, very slight ring modulation and hints of chorus effects.
Today, all of these methods are obsolete. I would like to thank today's performers for agreeing to rethink the piece using entirely digital treatment, thus giving it a new life.
The piece is dedicated to Claude Pavy, who premiered the work.