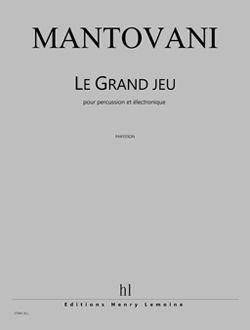 The electronic sections of this work were produced at Ircam.
Electronic Music Design: Mikhail Malt

After Double Jeu for membranophones and tape (Aujourd'hui Musiques festival, 1996), after Moi, Jeu...<.i> for solo marimba (Présence 1999, Radio France), Le Grand Jeu is the third section of the Suite Ludique, a cycle of percussion pieces that I began 4 years ago for soloist Jean Geoffroy. The work juxtaposes seven different sections, unified by certain recurrent timbres (meshes in the bass, cells in the congas transformed by various methods...) and by easily identifiable principles of articulation (momentum, projections...). Throughout the 16 minutes that make up the piece, the discourse oscillates incessantly between writing inspired by the electroacoustic universe (abrupt and unpredictable dynamics...), and allusions to "popular" music (funk, techno...). These clear reference points for the listener are the dramatic pillars of the piece.
The methods used to create the electronic part (entirely pre-recorded) are extremely numerous. I tried to achieve maximum diversity of the sound palette available to me by using varied techniques, ranging from editing recorded elements to sound transformation with Audiosculpt or GRM tools software, from synthesis through frequency modulation to mixing with Logic Audio. The program "Super Collider" was of capitol importance in my work, notably for the sections using granular synthesis. In these sections, percussion rolls and electronic sounds function on a principle of analogy and fusion, while at other moments in the piece, I instead tried to dissociate the instruments from the "tape" with regards to timbre (but not on that of vertical alignment).
Le Grand Jeu was premiered on September 29, 1999 by Abel Billard at the Saint Germain auditorium in Paris, as part of the musical season of Ircam, and is dedicated to Philippe Hurel.