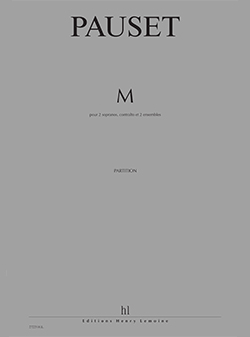 For M, I drew on the works of three authors: Epicurus, Siger de Brabant and Paul-Henri, baron of Holbach, the three fragments of whose writings belong to the poetry of persecution.
On the one hand, the persecution was physical it was under Pope John xxi, who wished to smooth over the disturbances of the University of Paris, that Archbishop Étienne Tempier, on 7 March 1277, condemned 219 articles, among which were certain theses attributed to Siger de Brabant, a 12th-century academic influenced by the Arabic translations of Aristotle and the pagan philosophers. And on the other, it was the persecution of anonymity, for the "Système de la nature", from which come the three fragments by the baron of Holbach, were published under a pseudonym, and the work was burnt in accordance with an act of Parliament on 18 August 1770. In his closing speech, the Chancellor Séguier denounced all free-thinkers: "With one hand, they try to rock the Throne with the other, they attempted to overturn the Altars".
Furthermore, it was a persecution of memory, for Epicurus' teachings not only went counter to the movements of his time but also met with incomprehension on the part of those who succeeded him. Three writers, three tongues - Greek, Latin and French - and three themes, matter, the soul and death.
Brice Pauset says he has therefore composed a "materialist oratorio". The nine sections of the work correspond to the three trios which are composed of a vocal trio (two sopranos and one contralto), a trio of early instruments (viola d'amore, theorbo and harpsichord), and a wind trio composed of the same instruments as in In girum imus nocte et consumimur igni (alto flute, tenor tuba and double bass clarinet). This forms a permanent low-pitched trio on a canon for three voices, with an antiphony born of the aria/chorale alternation in Bach's motets, and the hieratic chorale for the Holbach fragments. In between each section a musical commentary develops the material of the preceding section. The combination of this arrangement, and the distance it creates, means that there are numberless possible interpretations of the work.