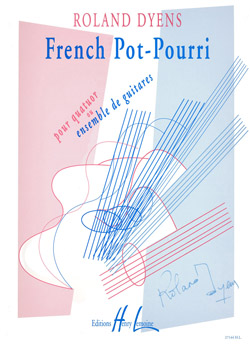 After the rigours of composing a concerto for two guitars (such as Concertomaggio), and wanting a change of scene, I have found the most enjoyable activity lies in arranging.
So I jumped in feet first and came up with French Pot-Pourri and its nine well-known French tunes and children's songs, all dressed up for the occasion (because an arranger always takes care to dress his subjects well).
There is little that is more uplifting than to hear the reharmonisation of a simple tune, known and loved by all nothing more magical than to take a melody from our collective memory and display it in the light of some unexpected chords supporting a mere four notes. But I digress.
Obviously, you will have guessed by now that the raison d'être of French Pot-Pourri is to be above all enjoyable. But there is more to it than that: the numerous modulations will enable you to get to know new keys that you seldom meet in guitar music, thus combining performance with the delights of discovery. At least, I hope that will be the case.