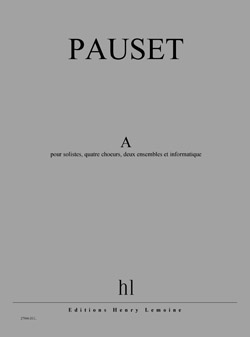 On reading Antonin Artaud's writings dating from his years spent in psychiatric hospitals, writings which are incidentally corroborated by various biographies available today, one cannot fail to be utterly amazed at the incredible physical resistance of a man who, from June 1943 to December 1944, was subjected to no fewer than 51 electric shocks, in conformity with the current "therapy" of the day.
Despite the obvious decline of his battered, beaten and aging body, the eyes that stare out from the famous 1946 portrait have a profound effect on all who see them, even today. His shattered physical forces were shored up by his mental resistance, his ideas that enabled him to build up a universe of constant strength, which in no way excludes a mythological reading of his real experience.
Artaud's ideas resist because they create something, something eccentric, maybe even - mad. "Voilà", the word has been pronounced. Undoubtedly we may use the term "madness", so long as we exclude all pathological connotations, even the use of the word as the antithesis of "reason", or at least reason as the norm for universally agreed social behaviour.
The danger lies precisely in (mis)using madness as a yardstick for our reading of him. Nothing would be so effective in committing Artaud once again, in accordance with a shallow understanding by which poetic delirium erases the essential, namely the constancy of his ideas, rooted as they are in the conscious absorption of fundamental archetypes. This was a vision of the world that was revealed to him by valuable intellectual tools such as Greek, which he learned at school, and which was later to pierce the rugged bark of speaking in tongues.
It was the extremely strict constancy of Artaud's thinking that led me to develop A, a work which does away, as far as possible, with all contradiction between Artaud's work and the type of labour to which I have accustomed my enemies.
I decided to set Artaud's words in the context of three other authors, Carlo Michelstaedter, Ovid and Friedrich Nietsche who, either by their proximity or by the nature of their distance, were able to provide bridges of meaning, from an almost literal quotation to the most heavily veiled insinuation.
A great many symbols, some of them fairly prominent, and others more subterranean, dilute Artaud's presence throughout the layers of composition, so that the entrance of six sopranos on stage evokes Six filles de coeur à naître, just as the rich sounds of Artaud's voice (in a radio recording) permeate the air as we listen to the same text sung in turn by one of the four choirs, a soloist and a narrator.
The visual presence will nevertheless be limited to the musicians on stage there will be no scenery and no body movement, for Artaud is above all a Voice. Right at the end of the work, the vocal soloists, the four choirs, three woodwind and two pianos converge on a pivotal point which embodies the entire meaning of my composition, in the form of a quotation from Bach's St Matthew Passion: "Was hat er denn übels getan?" (What evil hath he done?) If the work needed to be propped up by a subtitle, it would be "Passion profane".