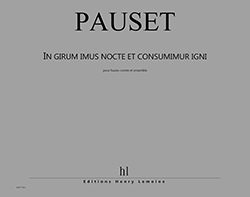 In girum imus nocte et consumimur igni ("we turn around in the night and are consumed in the fire") embodies my wish to make historical musical forms objective, made so as to adapt to their context in the light of today's musical needs. The instrumental part makes generous use of the techniques of the "prolatio" canon, while the vocal part refers to the practice of organum, whereas the role of the computer during the concert is to reveal what would otherwise remain latent.In this sense, technique, which also had a part to play during the composition of the work, fulfils its etymological function of the "art of making obvious", while at the same time retaining a rigorously non-spectacular rhetorical situation. I believe that it is high time now to deviate from what is flashy and sadly invasive. Probably this pessimistic work will be criticized for its fragile co-existence found in the lancing antiphony, its elements and gestures which at first sight appear incompatible. The critics will all be right. The words are fragments taken from the complete works of Guy Debord, and are easily understood in concert, so that there is no need to repeat them in the programme note. Their aim is not to please.
The work was composed in memory of Guy Debord.
Brice Pauset,
translated by Mary Criswick