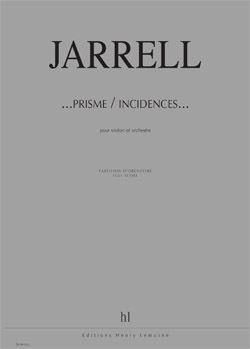 The notion of prism applied to a whole instrumental ensemble, which Jarrell makes explicit in the title of his work, condenses and crystallises the hidden side of the solo violin. "I frequently like to use an extra-musical concept," Jarrell points out, "whether from the visuel or literary sphere." It was with the fullness of drawing that an artist such as Giacometti sought "this incredible means [...] of seeing clearly like no one else." Similarly, it is again with the fullness of the melodic pattern that Jarrell seeks contradictory or complementary angulations, the moment when the instrumental ensemble falls back on the violin, for example, like a facetted crystal, a prism that transforms the score into an object. As for the notion of incidence, it must be understood in the architectonic sense of the term. With Jarrell, there is a dialectical desire that consists of working sound masses by line and inversely so that the instrumental ensemble refracts the attributions of the solo violin, creating singular, independent volumes. One of the decisive effects of incidence lies in the transformation of instrumental colour by instrumental colour. The magical paradox of the prism: in splitting up the sounds of the violin, by distributing them in "crystal" fashion, Jarrell manages to modify the recognisable quality of the instrumental attacks. More than complex interpolations of timbres, it is a matter of acoustic "beams", rendering a homogeneous perception of sonority null and void, whereas the work's formal development meets a transparent norm. The plurality of incidence or incidences answers the singularity of the prism. The shock provoked by the refracted wave is limitless or, at least, the limits of notation, which, with Jarrell, often looks infinitesimal and does not imply a limited promulgation of colours and volumes. Here, the rhetoric of the concerto reaches a threshold of its own destabilisation or even dissolution. The prism infers the incidences as form and no longer only as grammar.