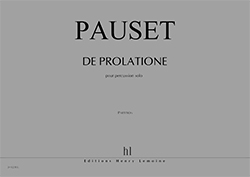 De Prolatione, for solo percussion, is sub-titled "canon", which could be taken to mean that the performer is faced with a certain number of independent musical lines - two, at the very least. This is not, however, the case here as the term "canon" describes an unusual practice based on a functional distinction of metre and rhythm. The canonic procedure is applied here so that the "subject" is exposed in the proportion of a slow time, the metre (every bar in this work), while the answer is given simultaneously "in prolatio" (i.e., literally, measured to scale, by counting) in a fast proportion, the rhythm.
The theoretical principle is thus put into practice exhaustively, using a process that has been observed, and thought out beforehand with the greatest care. The work underwent both a traditional "manual" working and a formalizing procedure so that the structure and syntax became explicit, liberating its theoretical substructure and highlighting my aim to keep these historical techniques objective.
In this respect, the initial choice of thematic material, the quotation 23 "movements, or measured feet" described by Marin Mersenne in his Harmonie Universelle of 1636, a vast and almost exhaustive theoretical fresco, also follows this same path of necessary objectivity in these days when theory gets the cold shoulder.
I chose the instrumentation to aid the listener, using dynamics that tend towards a bare surface, where the underlying complexity becomes the vehicle for the expression of wanting and waiting, subtly combined.