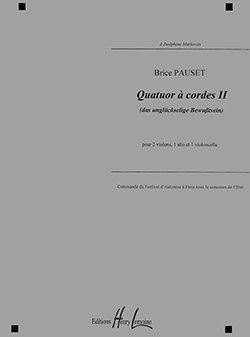 The Second String Quartet ("Das unglückselige Bewußtsein") borrows its title from Hegel. "Unhappy knowledge" means that knowledge of the tension between the painful finiteness of Man and his idea of the infinite.
"The worst is always to come", wrote Brice Pauset, and his pessimistic art should meet such a concept. By multiplying the mirages of latent polyphony the composer demonstrates his attachment to the tensions between bars, metre and rhythm, by the abundance of the swarming irrational values.
While the Quatre Canons recalled the Italian techniques of Vivaldi and the almost experimental way in which he called on his soloists for virtuosic agility, the Second String Quartet marks the disintegration of the instrumental line-up, so that solos, duos, trios and quartets follow in rapid succession, performing virtuoso music that is neither dry nor secretive, but open and fragile.
The most difficult passages, the densest polyphonic structures imply an impetuous expressivity which shows Man all that he can accomplish, all that is allowed by the vigilance of his uncertainty, before slumbering in probable despair, in "unglückseliges Bewußtsein". The mastery of counterpoint and the paradoxical depths of its appearance confirm, if not physically, then at least symbolically and metaphorically, our divine power.

Laurent Feneyrou,
extract from the programme for the Festival d'Automne à Paris, 1996,
translated by Mary Criswick