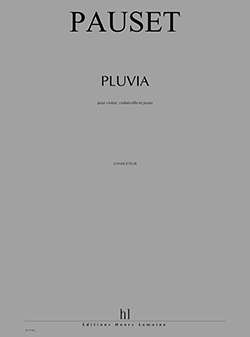 As indicated by the title, the basis of the piece was centred in the idea of irrigation, in the alchemical meaning of the term, that is, a multiplication of matter in both quantity and quality.
The form of the work and its development are as follows:
- A "theme" (a provisional reality) played on the strings, followed without a break by a group of ten cells on the piano.
- A passacaglia in ten variations, in which each new variation, transformed by the ten cells on the piano, acts as a new reference to the next one. Each variation doubles the length of one of its ten constituant parts so that the tenth and last variation is exactly twice the length of the initial "theme".
- The passacaglia is arranged in four groups of one, two, three and then four variations. Each group superimposes the variations while progressively delaying the entry of each one.
- The work ends with a coda which gathers together all the techniques of material transformation used up to that point, including transposition, rotating intervals, inversion, modulation and filtering.
At this point I would like to draw the reader's attention to a process of which the logic led me to re-route the pre-ordained scheme of the work. In the "theme" there is a bar (bar 6) which is, in essence, specifically subversive and in a conflictual relationship with the rest of the material. This bar gradually disappears and its material turns in on itself so that by the last variation nothing remains of it. In order to highlight its disappearance, at the last minute I decided to replace the total absence of this bar, and all the absurdity that it implied, with a general pause lasting just as long as the bar did at the start (six quavers).