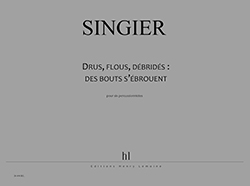 Drus, flous, débridés: des bouts s'ébrouent was written in memory of the Chinese composer Mo Wuping, in homage to the Percussions de Strasbourg, and derives a great deal from the discovery of certain rare instruments, notably the "pu-ti-pùs", Italian friction drums. The work is divided into four movements in each of which the main role is given to a particular timbre, whereby the friction drums lead the first movement, wooden instruments (marimbas) the second, metallic instruments (cymbals and xylophones) the third, while the fourth is dominated by hand percussion.