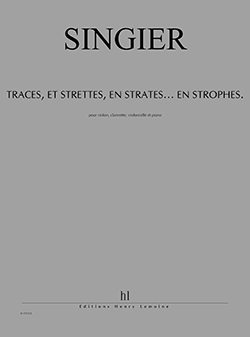 This work is part of a cycle of three pieces, with different instrumentation, based on an Iranian rhythmic series. The idea of the cycle was the result of a project with the Italian painter Graneto, whom Jean-Marc Singier had met in Rome, and who was planning an exhibition of which music would be an integral part. There are five periods which constitute a single movement, in which the parts are linked by the tempo and by ideas. It is the imprint of a rhythm and the embryo of a harmonic field that together form the "traces" of the introduction. The flexibility and substance of the material are put to the test in the second section, while in the third and fourth parts the material is subjected to "strettos" which tighten it, and to superimposition in "strata". In the final period, the rhythmic series reappears, unadorned and in its entirety. Jean-Marc Singier was motivated by two important aspects in writing this piece: he wanted to integrate a traditional material into his own musical language (in this case, the 5/4 rhythm borrowed from music for the Iranian zarb or goblet drum) and he wished to blend the specific character of each instrument in a single unity of original and personal timbre.