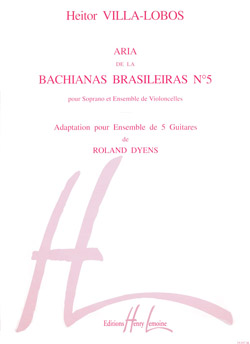 Aria, extr. Bachianas Brasileiras n°5 de H. Villa-Lobos.
This is exactly the opposite process of Ville d'Avril, because here I began with a complete transcription for guitar ensemble of the original gorgeous Aria, taken from the series of nine Bachianas brasileiras by Villa-Lobos (rightly considered as a second national anthem for Brazil), not the other way round. While this was a relatively easy transcription, the solo guitar arrangement that followed was, I have to admit, horrendously difficult to realise. I do not need to spell out the problems here they were part of a challenge that demanded perhaps more valour than discretion. But where the guitar is concerned, the art of arranging (or adapting) is often bound up with the art of knowing what to sacrifice.
I sincerely hope that the present version of this legendary aria will never be considered as the sacrifice of art.